My long slumber finally ends, my first in the warming embrace of a bed. The safety of its many layers saved me from the cold and the many creatures that wish me harm, sparing me of an eternal paranoia that prevented me from any rest or solitude. Baking in the shine of the morning’s celestial beams, I ponder the day’s challenges as I’m left in wonder in the shadow of my previous inventions and structures.

-Relishing the glory of my great obelisk I recall the previous night.-
Unable to sleep some point, I perform a cautionary patrol of my inner quarters and cavern entrance. Returning to the ground from the subterranean, I hear manic thuds as I climb the stairs. Paranoid and fearful I reach for my iron sword, glancing over my weaker stone axe, convinced of an imminent danger judging by the severity of the throbs on the door to. Scrambling across the hall I search every entrance, unaware of the source of the intrusion. After several attempts at incorrect doors, I find several undead nearly through the gateway entrance. Taking a encouraging breath, I open the entryway, allowing the creatures access to my blades edge. Several swings to each creature later, I am again alone, confirming my assertions by checking my surroundings, the glowing essence of my foes absorbing into my being, warming me against the cold for several seconds. Nervous about what other dangers might be closing in, I relinquish to my bunk, wishing that slumber’s embrace will defeat my fears.

Back in the morning’s cradle, I am pulled from my imagination to engage the reality of the daylight. Trying to recall my former efforts, I scan my surroundings noticing the cleared jungle that forms the beginning of a yard. A few paces past, the ever engrossing jungle. What is beyond I doubt I’ll ever learn, since I’m to scared to leave to comforts and safety of my abode. The sudden rush of memories of death and my desertion in the jungle scrambling for the lights and signals of my tower convince me this is not first occurrence of such thoughts, or that this is my only life.

My plans were interrupted by the a rumble of my stomach. Returning to the chest near my cot carrying my provisions, I feel the familiar shape of a sphere in my pocket. Upon reaching my forearm deep into its pouch, I discover several apples. Admitting gluttony, I stuff my mouth, grasping for air between chunks of apple, seed and core. Stuffed to the gizzard, I return the alluring forest.

Impressed and daunted by the impenetrable silhouette of the trees, I hesitate adventuring away. The lack of food and gear paired with my disappearing levels of knowledge of the world pause my stride. Crossing the small bay that shelters my tower, I trim the tree line expecting a day’s objective to make itself clear. Hesitation ruins the day. I feel the chill of the moon as I slow my lumbering rhythm and greet the celestial glow of its distracting surface. The scruff of my neck stands to attention at the ethereal grasp of paranoia’s clutch as my tasks became meaningless along with the day’s rays and I sprint for the candles scattered around the ground to steer my eyes home. Upon slamming the door and a return to composure, I turn to face the lunar satellite, cursing it for my lack of conviction. 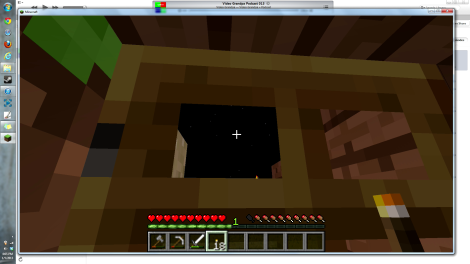 After a glance at the comforts of the silken sheets, my mind shakes to the realization that the day cannot end with such disgrace, I must face the land below. Steeling myself for the dangers of infinite night, the ever spawning womb of monsters and ghouls, and the source of recent nightmares: a creature that’s knowledge and practices in the world far surpasses my own functions, a disturbing beast resembling man’s shadow, capable of moving without the requirement of its leg’s motion and are driven mad by the direct gaze of others.

The ever expanding tunnels that I endeavor to illuminate from the grasp of monsters soon teach me of the impossibility of the task, as each tunnel I kindle, the world births another. Exploring the great hall at the bottom of my underground staircase, I venture the tentacle like passages that protrude from the chasm. Searching a hole to its end for iron, coal, and gold, I become distracted by a stray path upon my return. Following the stray, I find its connections to rocky foyer at end of the hall. While trying to weave a connection, I hear more rumbles of the undead, instilling fear, and causing my mandible to form a grit. Exploding the small agitation to full despair, the siren’s call from the manlike demon. Retreating to reinforce my courage by dumping my blunder, I turn to face my nightmare, revitalized and determined to defeat the abomination.

To no avail, I search the halls endlessly, bent on slaying the creature creating my grief. Avoiding hunger with my last remaining apples, I stumble off a ledge in my gluttony, landing in the lap of the prickly cactus-like bio organic explosive, its creepy gaze piercing my conviction to escape is bursting defense. Pulling myself away from the loose stone, I find myself wounded but alive. An earthly creation couldn’t pry me from my mission, even a creep, though fear and paranoid imagine cause my hands to dance. 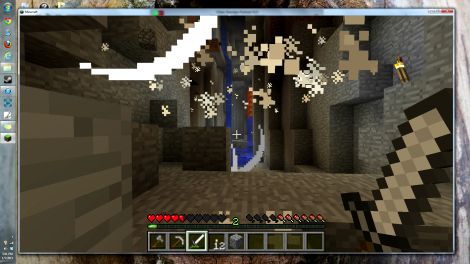 Upon arriving back to a familiar locale, I hear the ethereal horn of my foe, causing my legs to move away autonomously as my fear peaks. Once I reach the safety of my door, my courage returns, demanding my leg’s cooperation, spinning me to offensive. Patrolling the sources of the noise and its surroundings for several passes proves my cowardice, as my foe has departed. Feeling the warming winds blowing down from burrowed passage and stung by hunger, I abandon my hunt. You win this round, demon. 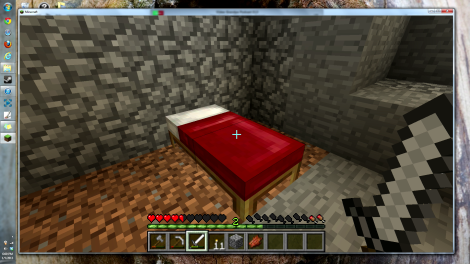